After an hour of attempted map-reading and traversing through a relatively traffic-free city, we reached our luxurious little hotel, Athenian Callirhoe, strategically placed in the pocket of a street corner. We, like the Greek, don’t like spending our summer evenings indoors! A satisfying dinner – in the heart of Plaka, a marketplace – of potent Ouzo, a local aperitif, and plenty of souvlaki containing char grilled kebabs and steamed vegetables, put us in good mood after the grueling ten-hour flight to here.

Sightseeing in Athens was like taking a peek into world history. 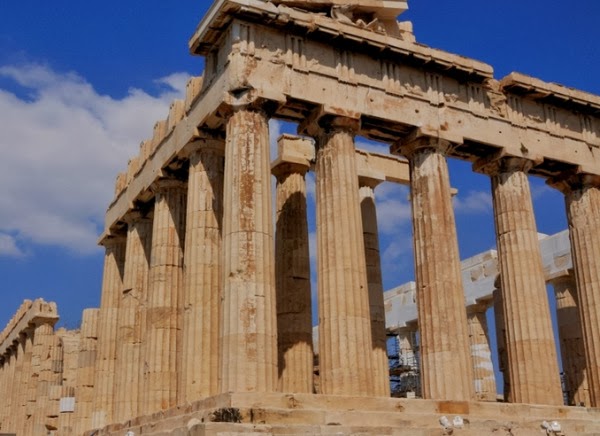 The Temple of Olympus, the Panathenaic Stadium and the Acropolis, all built in reverence of their Gods. If you’ve ever wondered how these monumental, neo-classical erections were built – of course, with the help of the Romans, hence the similarity in construction. The view atop the Acropolis, survived by the Parthenon, dedicated to Goddess Athena, and Erechtheion, an ancient temple opposite the prestigious olive tree – although the ruins rounded by weather – was palatial.

No words can describe this vastness, these ramifications, an expanse holding secrets from the past. 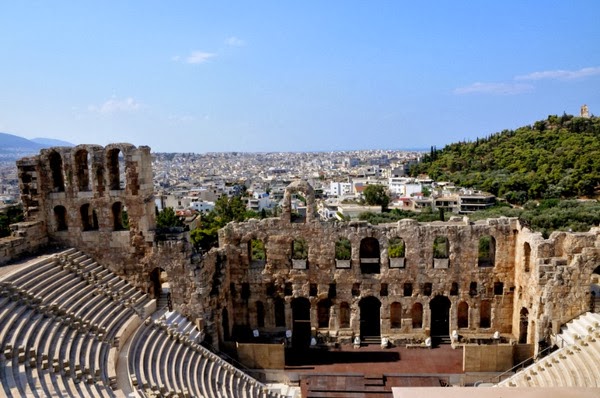 We trudged upon a famous, Vyzantino, cafe for more souvlaki and liquid. The labyrinth of alleyways, the open-fronted gift shops, feral cats sunning themselves and the general bustle of the city center was a sight to be experienced. It was not long before we set off to visit a few more island-towns.

The sky was brilliant with sunshine as we merged into the strips of clouds above us. What we knew of this land was not what we saw. It was more. It was dreamlike.

We took a bus to our hotel, through a network of spider-webbed roads, on top of the cliff. The Myconian Imperial Resort, the King of all resorts in Mykonos, with restaurants overlooking the crystal clear waters of the Aegean, was where we arrived. 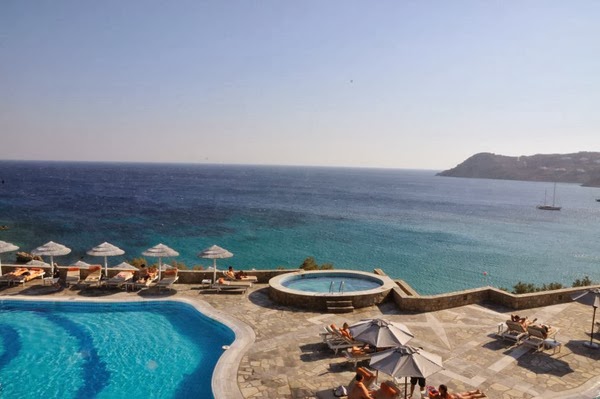 Champagne breakfasts, late lunches of mouthwatering, pan-fried feta, herb fillets, with seasoned baby potatoes and carrots, and local products, Mythos and Metaxa, were had. Dessert always ended with Mastika; it would be right to mention here that just one swig of this anise-flavoured liquor will suffice as a digestif for all your meals! We proceeded to a cute village in the heart of this Cyclades island called Little Venice, which apart from looking exactly like it’s name suggests, had the iconic windmills looming over the landscape. 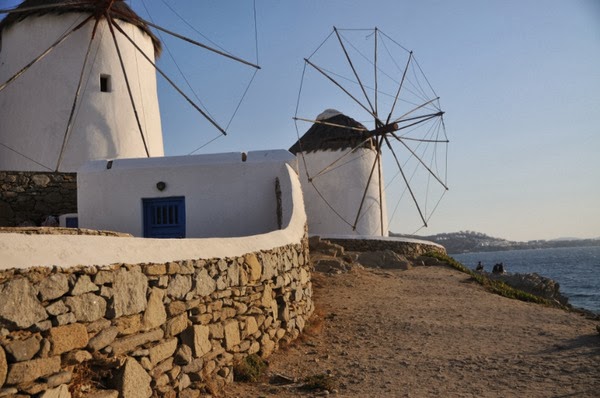 This was also the seat in contention for the most beautiful sunset in the world. 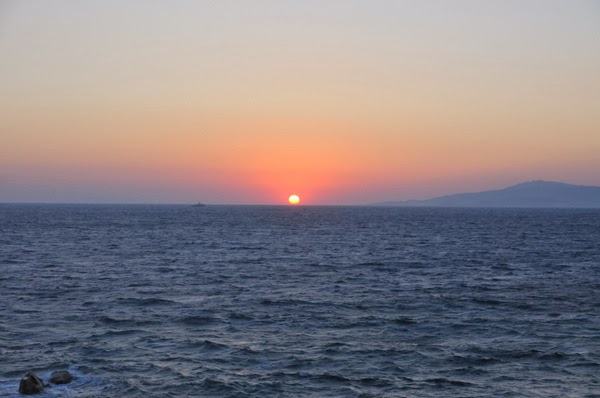 The orange sun almost looked like it was nudging the horizon. We sat there, drinking Fix and eating Kataifi and mango gelatos, in the pre-dusk quiet. It was stargazing heaven.

It was believed, you can’t give birth or die, in this historic – now abandoned – town of Greece, because that was considered human activity, and Delos was the birthplace and the Land of Gods! A short ferry ride, with the pulsing wind in our hair and the harsh summer sun staring down, took us to this islet. 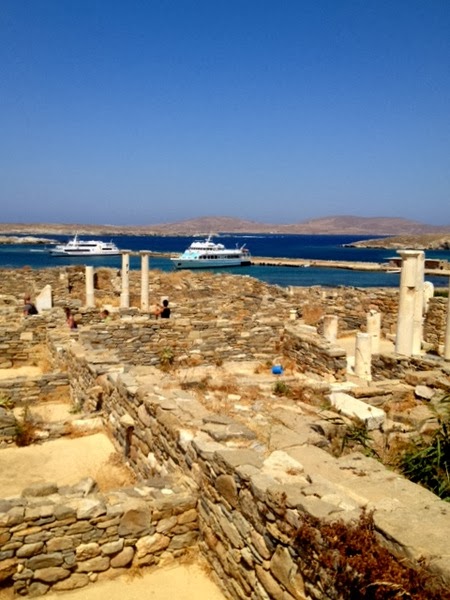 Delos was the city with a story, the story of Gods. A mythological wonderland.

This day-cation ended with going back to Mykonos for some more hummus–pita and the honey and cinnamon cakes of baklava. Heaps of it, at that.

The port of Santorini, or commonly Thira, blistered our eyes at first sight, beauty like that.

Brunching by the Mediterranean, with a view of the caldera and a platter of feta and graviera cheese, sun-dried Santorini tomatoes, tzatziki, sauce made of goat’s milk, black olive oil paste, fava bean puree and Greek pastas, giovetsi and skordomakarona. From our hotel, Adamant Suites, another ridiculously, soothing view of the capital city, Fira, and the town of Oia in the distance, typical blue & white homes from which occasional ribbons of smoke arose, the sunset, as it crested the cliff every evening, and the turquoise blue, pristine, gleaming waters.

Breakfast was with a view and truly, extravagant. 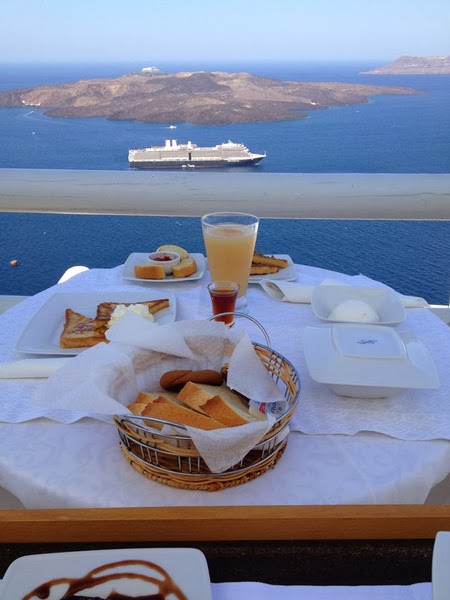 As a curtain of clouds parted, there were shards of sunlight drifting over the part-submerged volcano, and then, that gentleness of breeze from the ocean. Isolated by this on one side and a steep cliff on the other, the narrow, zigzag trails, running through the city, looked like they were etched. Donkeys jingled up and down these routes daily but we took the one leading to Akrotiri, down prehistoric memory lane! This archaeological site was destroyed by volcanic eruptions and dates back to almost 1 millennium BC.

A whiff of past splendour.

Snorkeling noobs that we were – not ashamed to admit that we were quite intimidated – the leisurely waters off the black sand Kamari Beach, was pretty damn amazing. Streaks of sunlight struck the water, waves lapped at the cliffs and there was a chop in the sea; the marine ecosystem in the Mediterranean was resplendent, colourful and plentiful. 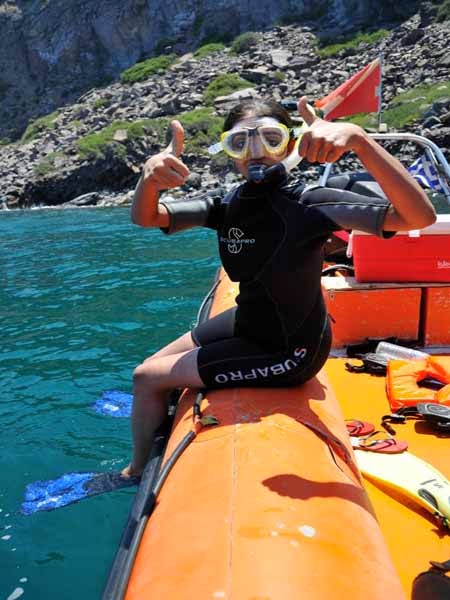 On our journey back, we jet-skied to the starting point, battling the monstrous waves but taking in the scenic allure, that actually brought us to Greece. Burnt like a firecracker but ready to take on another meal! Fried saganaki and mecho dessert wine before we reached our final stop, Astarte Suites.

We were sure we hadn’t seen anything like this, ever before. 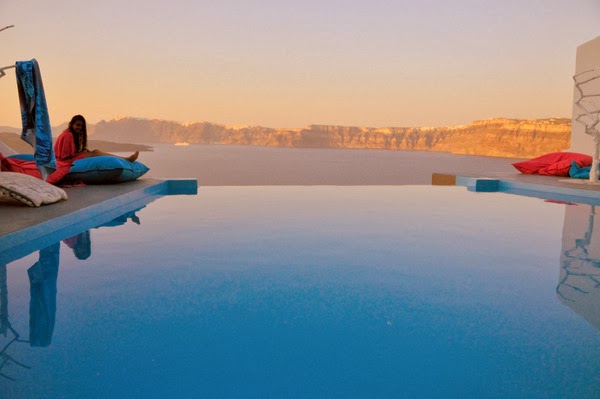 Twilight chill, poolside dining (strawberry risotto and wine), the sky beginning to thicken with stars, a hint of papery white light from the moon and…

…the most beautiful place on Earth, yet.

“Sometimes, even though we might never find what we’re looking for, isn’t it enough to just walk together in the moonlight?”

6 thoughts on “Antiquated in Surreal Greece”